As you may or may not be aware, this Monday was actually a public holiday in the UK, and as I was thinking about what to do for this week’s Throwback Thursday I remembered the day I interviewed Sharleen Nelson was also a long weekend.

Oh! I thought, Maybe it’s been a year to the day since I interviewed Sharleen Nelson!

Nope. Turns out it was actually way back in June 2018. However I was so excited at the prospect of revisiting Penstricken’s first author interview that I said, ‘what the heck!’

This was originally published as two separate posts, so today I give you:

While every effort has been made to avoid spoilers in this post, anyone who has not read The Time Tourists by Sharleen Nelson is hereby advised that this post may contain a few unavoidable spoilers.

If there’s one thing I love, it’s a truly imaginative story. As a story about a time travelling private detective, The Time Tourists by Sharleen Nelson definitely fits that category!

I had the pleasure of interviewing Sharleen, whose debut novel The Time Tourists is available to buy on Amazon and other retail outlets.

You’ve been a journalist and an award-winning photographer for over twenty years. What made you decide to write a novel?

I have always been a writer, ever since I was a little girl. I used to spin stories in my head, complete with an array of characters and dialogue. I started one novel and got about 40,000 words into it, but then couldn’t figure out what to do with the characters, so abandoned it. This particular story started percolating about 10 years ago. My father had died recently and I was pretty devastated. I thought that getting lost in a nice little fantasy might be good therapy.

What was the main inspiration behind The Time Tourists? 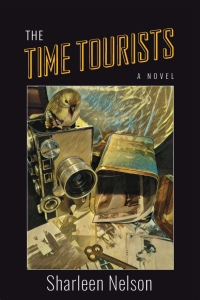 Well at the time I was working as a magazine editor/writer at this place called Marathon Coach– they build these million dollar luxury buses. Anyway, in the bathroom were framed prints of local street scenes from around the turn of the century– people walking, doing things, cars and buggies. I remember looking at those and thinking, ‘how cool would it be to just be able to walk into that picture, into that scene and be a part of it.’ I love history. I’m a photographer, and if time travel was real, I would totally do it! The combination of things just sort of meshed and I started forming the story. I didn’t want to deal with the tech part of having a time machine; I wanted it to be more of a magical thing, so that when my character arrived somewhere in time, the universe just filled in everything for her.

Did you find anything particularly difficult about writing this novel?

Yes, I wanted it to be more character-driven, less science fiction. I guess you could say it’s more of a fantasy, but it doesn’t really fit neatly into either genre. I guess you’d call it “speculative fiction.” The most difficult part of writing it for me was letting myself get bogged down with plot structure. I knew the story. I never have writer’s block at all, but I wasted a good deal of time organising and reorganising and moving chapters around–should I weave in the backstory? Should it be chronological? Finally, I just decided that I needed to write the damn thing and worry about that later. Once I did that, it all sort of fell into place.

When I first read the synopsis I thought I might be getting a sort of sci-fi/cozy mystery combination but there are actually a lot of different and sometimes very dark themes running through this story making it quite hard to categorise (definitely not a cozy, however!). What would you say was your central theme(s)?

That is a great question! You’re right, it isn’t the cozy tale that one might expect. Of course, as every writer does, I drew things from my own life and I wanted Imogen to be this very real, complex person with opinions about things. I didn’t want to just send her off on adventures without the audience knowing what motivates her. So much of it evolved as I was going along. It’s true what people say, that sometimes characters seem to have minds of their own. Teddy is a very dark and twisted character. He came about from an experience I had when I was 19. I was majoring in psychology and for a time, I volunteered on a crisis line. The phone calls were routed to my home phone and I had a list of resources to recommend to people who called in. One night, a 16-year-old boy called. I wasn’t supposed to council anyone, just refer them, but he started telling me this horrible story about how his mother was abusing him sexually and that she would let him use the car if he slept with her. Of course, that stuck with me and not only did it make the reader feel more sympathetic to the Teddy character, he wasn’t all pure evil, but also showed that abuse comes in many forms. It’s not always male perpetrators. I also wanted to explore themes like religion, misogyny, feminism, or what it’s like being a gay person in another time. So I’m not sure that there is a central theme. I just wanted to create characters that the reader could maybe identify with, who have real motivations and real flaws.

Let’s talk some more about your characters. Teddy is probably one of the most messed up characters I’ve ever come across. He’s absolutely vile in many respects and guilty of some pretty awful crimes yet there is also something pitiable about him. How do you go about developing a character like that?

He started out being just this borderline sociopathic neighbourhood bully with a kooky mother. We do feel sorry for him at times because, after all, he is this sort of confused teenage boy who wants to be good–he is envious of Imogen’s family. He would like more than anything to be their boy and have a normal life. But on the other hand, his mother has been doing unspeakably vile things to him since he was a child. He knows he will never be able to recapture that innocence and he also doesn’t feel like he deserves to be loved and he takes all that rage and pent-up anger and directs it at Tiffany. But just when he was beginning to feel better about his life, she shows up with the news that she is pregnant. He liked his job. Niles was mentoring him. He was thinking about a career. But Tiffany ruined everything. His reaction was obviously to get rid of her. In developing Teddy, I read up on sociopathic behaviours– antisocial behaviour, deceitfulness, hostility, irresponsibility, manipulativeness, risk taking behaviours, aggression, impulsivity, irritability, lack of restraint–and combined that with a narcissistic, abusive mother–and voila! Teddy.

You mentioned earlier that Imogen had her own opinions about things. Throughout The Time Tourists, the audience is privy to a lot of Imogen’s strongly-held beliefs about a whole range of controversial subjects from abortion to Darwinism. Do you think it’s important for authors to use their protagonists to make points on important real-life subjects?

I think every author’s approach is different. Each author has their own story to tell. I don’t know that it’s necessarily important, but for me personally, I think addressing real-world topics makes my characters more believable. I read something the other day about the movie Dirty Dancing. Everyone loves that film and it always feels like this very light, entertaining outing about dancing. However, the entire premise for Baby and Johnny getting together at all is because she is called upon to fill in for his usual dance partner after she falls victim to a botched, illegal abortion. I also think that if my characters are going back in time I have a responsibility to provide context and comparison.

If they ever make a film adaptation of The Time Tourists, who would you choose to play the lead characters?

Haha, I actually have thought about this–what author hasn’t? I sort of envision Jennifer Lawrence (Katniss in The Hunger Games) or maybe Emma Watson (Hermoine Granger from Harry Potter)– both seem like strong, feminist-type women. For Herbert Doran– Michael Shannon. He is so intense and awesome. Simon was actually based on a sort of Robert Downey, Jr. prototype, but I think we’d need someone a bit younger for the role. Not sure about Teddy– a method actor, for sure!

The Time Tourists is, of course, the first book in the Dead Relatives Inc. series. Now I know you won’t want to give too much away but I have to ask: what’s next for Imogen?

Imogen will have more adventures in time, of course, but there are a number of loose ends– her mother and father are still lost in time and we may never know what happened to Tiffany, or will we? At the end of the book, it was revealed that Teddy was Simon’s biological father, which unfortunately, makes Mimi Pinky his grandmother, so one can speculate what kind of a relationship they will have. Simon will have to also become acclimated to living 100 years in the future and as the new guy in Imogen’s life, I envision some conflict between he and her ex-boyfriend Fletcher. There will be a few other surprises that I’ll keep under wraps. I also see some danger ahead.

Final question: do you have any advice for anyone out there who might be thinking about writing their first novel?

Forget an audience. Write for yourself and don’t censure yourself. What do you like to read about? When I was a little girl, I enjoyed it so much because I was basically telling myself a story. Enjoy the journey. Just like the reader, as the writer I keep going so I can find out what happens next. Say what you want to say and write what you yourself would like to read.

The Time Tourists by Sharleen Nelson is available to buy now on Amazon and other retail outlets.